My first gainful employment putting words down on a page was as a music writer. Like most writing gigs, it started out with doing things for free. When it comes to free work, reviewing is the best option. Aside from the intangible notions of experience and opportunity that will be cited (sometimes genuinely) by anyone who wants your work for nothing, at least reviewing means that you generally get to have the thing being reviewed. If you’re reviewing a restaurant, someone has to give you a feed. A friend who works in tech assessment has a different smartphone any time I see him. Music writing, as long as you can pick your assignments, lets you go to concerts you were too broke to attend, and you can often take someone you like into the bargain. For what it’s worth, reviewing albums helps you expand your CD collection, though as the years have gone by, that has begun to seem more con than pro.

In my state of student poverty a few years ago, these perks were enough to start me writing for a free online mag, the now-defunct ultra-indie site Wireless Bollinger. Aside from expecting it to vanish at any moment under the weight of a single legal letter from a certain champagne manufacturer, I found I was an unnatural fit in a stable of writers who would jizz down their legs in perfect synchronicity if Thom Yorke farted into a dictaphone. The Album of the Year writers’ poll was an annual foregone conclusion, because surely Radiohead had at least released an instrumental mp3 under a fake name on an obscure Russian torrent server, and of course that counted because THEY ARE GENIUS DAMMIT. There was also constant conflict regarding taxonomy and category: no, we can’t cover The Rapture because they aren’t ‘indie’ music, but next week we’re going to send you to Cut Copy and ask you to review the new Chemical Brothers record. The last straw came after a couple of years of being told not to mention any of the hip-hop acts while reviewing major music festivals, when I booted up the computer to find Kanye in our best album list. Because… well, Pitchfork did it…

I like Kanye as much as the next white guy, but still – fuck that shit.

Amazingly, despite barely posting any new content in the last year of its life, the site was eventually sold as a going concern to a new group of guys who were dead keen to take it over. They came bustling in, made their announcements, emailed everyone to say that they assumed we’d keep working for free, and enthusiastically ignored the replies asking how exactly they proposed to resolve the various and substantial problems of the site’s previous incarnation. Four months later, the entire site had gone dark. The domain name now dead-ends at a 404, and the hacked Twitter account is just iPad spam and tumbleweeds. A salutary lesson for anyone who thinks that data is somehow more durable than print. Check some papryrus, bitches.

Well before the whimpering end had come for Wireless Bollinger, though, I had also branched out into (minimally) paid reviewing for more mainstream outlets. Citysearch was a frequent option, which then syndicated out to MTV. As a person with what was then a deep antipathy toward pop music (the transformation of which I’ve laid bare in ‘Lady Gaga destroys Neo Tokyo‘), it was discombobulating to see my name below an MTV logo and above a discussion of Flo Rida. For those who imagine that there are riches and glamour involved with the world’s most recognisable pop brand, I can see you and raise you the $30 that I received per album review. MTV Online Australasia does not equate to getting stage-side at the VMA’s while Kanye intercepts Taylor Swift. Nonetheless, it was money that nudged me over the edge of a weekly personal budget deficit, so I persisted.

Which brings me to the very simple original point of this post, which was not in fact a discussion of my freelance employment history. The thing is, when you write reviews, you get a whole shitload of CDs. People give you CDs, people send them to you. The publications you write for send them too, not just the discs you’re writing about, but extras from the massive piles that they receive and don’t want to write about. Ever notice street presses trying to sound generous by running competitions to win 100 mystery CDs? Yeah, those specially selected gift packs are really just the result of shovelling a bucket through the drift of audio crud that has backed up in their office. It’s less about promotion than it is just getting shit out of the way.

Apparently the same trick is expected to work on their writers, though those same writers well and truly know the score. Random extras find their way into your review parcels as ‘bonuses’. Any visit to the office of a street press will usually end with someone pressing jewel cases into your hands. “Take them, please,” they smile, while their eyes grow wide and slightly desperate, and you think you hear “just fucking take them” added under their breath.

The net result is that I ended up with far too many CDs to ever listen to, and a large number that should never be listened to. They all ended up in a giant box in a storeroom. Last week, in the interests of getting my life in order, I decided to clear out that box. The results were varied and hilarious, and I want to share some of them with you. 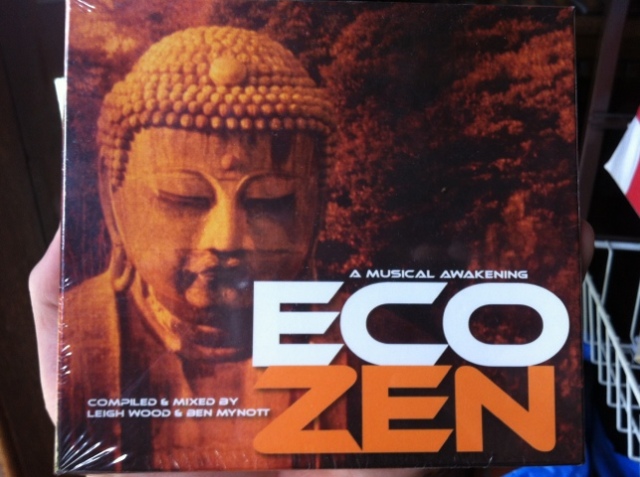 EcoZen: a musical awakening. For people who loved India because life there is just so much more real, man.

“Beyond mere chill-out, here’s where the ambient revolution begins.” STRAP YOURSELVES IN. WE’RE GOING BEYOND CHILL-OUT. I imagine this to be a really relaxed Mad Max film, where two warriors compete to see who can best roll around in a pile of people on some mattresses on the floor of a filthy nightclub while inhaling Medic fumes off a kawaii stuffed-animal backpack. Can I just raise a semantic point here? If chill-out is a point of aspiration, then surely going beyond chill-out implies you will be doing what chill-out does, only more so? Which is to say, being more chilled out? Less active? More comatose? Is that why we have to strap ourselves in? So we don’t slump unconsciously out of our chairs and shatter our front teeth on the coffee table?

Sorry, but a more intense version of chill-out makes as much sense as a hardcore butterfly kiss or a savage beating with soft cheese.

Cornlicker. This band make the list because their name is Cornlicker, and they apparently feature a man with a machine-penis putting it in a hole. That and the fact that they photocopied their EP cover onto nice red paper. I liked that.

Given that this is an EP in a plastic sleeve, someone probably gave it to me personally. Which means I probably know someone in this band, or at least know someone who knows them. Which means there’s a good chance they’ll see this, and might bring it up, and there’ll be that awkward moment when they’ll bring it up, unsure about whether I was really insulting them or just kind of taking the piss.

I guess I’ll say: Dude. Your band was called Cornlicker. To be fair, it does sounds like a Tennessee sex crime.

Faux-hobo bluesman track names are below.

Yeah, this isn’t exactly a shitty low-profile band, and I thought the Pumpkins put on a rad show last time they toured Australia. But still. This later-era record, after Billy recruited some high-school kids to play Darcy and James, is just that fucking awful. It really is. And it’s called Zeitgeist. I guess Synergy and Optimise had already been trademarked by juice companies. 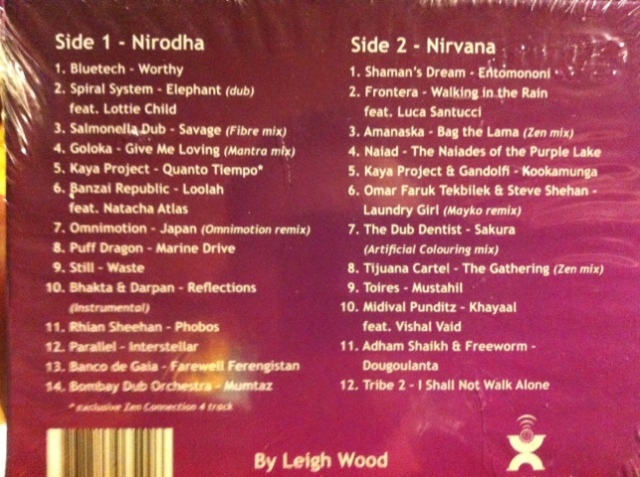 Hard to go past a record with tracks called ‘Reflections’, ‘Shaman’s Dream’, and ‘The Naiades of the Purple Lake.’

Hahaha, remember back in the days when blackface was funny? Like on Hey Hey in the 80s? Yeah, those were some good times. So this must be an album from… wait, they didn’t do CDs in the 80s. Ok, 90s then? Some hangover?

Here are some call synopses from another Tilley masterpiece:

3. Indian Holiday Disaster
Melanie Gault was leaving her job managing a travel agency and wanted to leave her replacement Sam Marshall with a very special customer… who was figuratively and literally a little “dark”.

4. Vasectomy
Karen Harman is a colleague of Nik Embury who had just had a vasectomy. She figured everyone at work could join in the fun as he snuck off to discover just how far the truth (and his scrotum!) could be stretched.

8. Doggy Style
Deep down every man likes to think he could make a woman bark like a dog. Bruno Preiato is no exception but being slightly prudish, he wondered if the job could be done for him on his friend Selina Camilleri.

14. Black Booty
“Irene” and “Connie” have been placed in the witness protection program. This is what happens when two girlfriends turn on each other just to find out if the other has been with a black man. Wearing a false beard will no doubt decrease their chances of a repeat offence with ANY man.

Aside from rolling on the floor at the suggestion that all black men have enormous penises (classic!), I did wonder whether the description of Selina in relation to Bruno should be less ‘friend’, more ‘colleague who he wasn’t brave enough to sexually harass himself.’ Goldmine, nonetheless. Some comedians are so intimidating in their genius that I never want to make another joke again.

Tilley’s isn’t the best disc I found though. No, that’s another one in the category of things that white dudes should stay away from.

In case you missed that, that’s Psychedelic Didgeridoo. A genre sorely lacking from our musical scope, filled in one brave movement by Elohims Child (he’s reducing his carbon footprint by cutting down on apostrophes). The production values, too, are breathtaking – I’ve photographed the interior for you below. Note the colour transposition from cover image to disc, and note the amazing track names.

Why is Timecrusadiers not the track on everyone’s lips, being covered by Walk Off the Earth in a YouTube sensation? It’s the disillusionment of injustices like this that drove me out of the music writing business and into the kinder world of politics.

This entry was posted in Uncategorized. Bookmark the permalink.